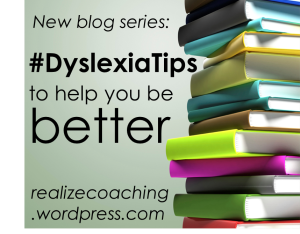 I’ve always wondered, why is dyslexia so hard to spell? If you’re dyslexic, spelling may be just one area you struggle with; others can include problems being organised, managing your time, reading, writing, languages, remembering stuff and many more that I just can’t recall right now…

Many clients I’ve coached have dyslexia – it’s estimated that 10% of us have it to some degree. Some experts argue over what dyslexia is and its causes – I think of it as being like a sound mixing desk – various factors including personality, perceptions, behaviours, preferences for learning and communicating that all can vary wildly from one person to the next – and a particular combination of them can cause difficulties and also be a particular strength. Entrepreneur Richard Branson for instance says that because he likes to cut through the waffle and state things clearly and simply, that this has been a key success factor for him. The critical thing is that rather than trying to battle against your dyslexia, that you learn how to work with it. There may be therapies and strategies available that will help lessen its impact, but like anything in life, once we accept the reality of our situation, we can start to get a new perspective and find a way to play to our strengths.

Tip 1: Stop Covering Up – I worked with one client who put a significant amount of energy and creativity into covering his dyslexia – none of his work colleagues knew about it – the only people who did were his partner and parents. At school he had been made to feel lazy and stupid, that he wasn’t working hard enough. He wanted to change his attitude towards dyslexia and be more accepting of it – I asked him how he would know when his attitude was different, and he said “I’d be making jokes about it”. After school, he had completed a primary degree without seeking any accomodations or concessions, because he felt he had something to prove and put huge pressure on himself to match up to everyone else. He has since completed a Masters degree, as many people with dyslexia have, but has learned how to accept it, work with it, use its benefits and the things he is good at that other people aren’t, to his advantage. He has also been promoted in his job.

I’ll be following this post with a series of further suggestions, both practical tips, and more fundamental attitude changes, that can help any of us, whether dyslexic or not, to be more productive and effective in our life and career.

If you have suggestions of things that have worked for you, then please feel free to reply or comment – would love to hear from you.

3 thoughts on “#DyslexiaTips to help you be better – Part 1”